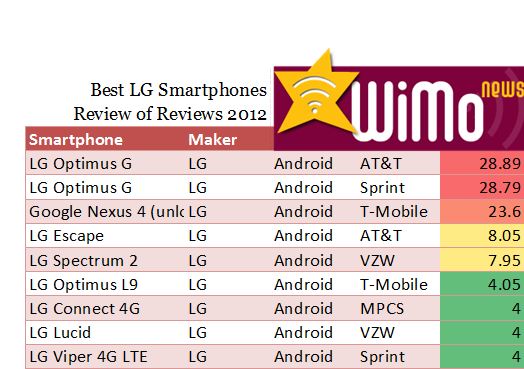 Last year, LG had no winners into the best smartphones of 2011 list  The LG Thrill did make it as runner up on the AT&T network.  This year there are many LG smartphones competing for the best of the year.  There were many LG smartphones that scored around 4 out of 5.  The ranking is not only based on score but mentions in the top best lists of several sources. It is the first time we've seen a prepaid carrier, MetroPCS have a top entry.

Here are the WiMo News' Review of Reviews Best LG Smarpthones of 2012 in reverse order:

7. LG Lucid at Verizon Wireless received an average score of 4 out of 5.

2. Google Nexus 4 Unlocked  and at T-Mobile received an average score of 3.933333333 out of 5. Reviewers liked most of the features including fast quad-core processor, latest Android OS, bright screen, price,  except in the unlocked version, they thought at 4G LTE would be better.

priced at  $99.99 at Amazon. com for new customers and upgrades with a contract.