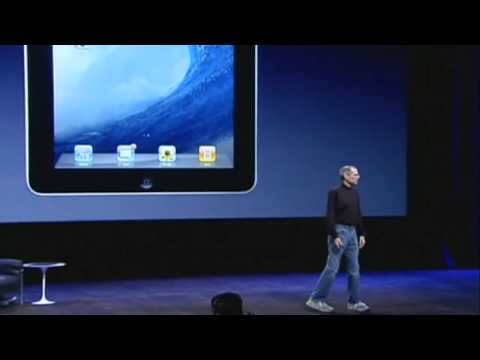 Steve Jobs revealed this morning the latest sibling to the the iPhone, iPod family, the iPad.

"It's like holding the Internet in your hand," Jobs said. He thinks its better than a smartphone or a laptop.

The iPad runs the OS that is on the iPod and iPhone. The iPad comes with calendar, address book, email, Safari Browser, YouTube, iTunes and Google Maps. The multitouch iPad has an onscreen touchscreen and uses touch gestures for drop-down menus.

A main feature is that it has the iBook app, with virtual bookshelf from which you can buy and download ebooks directly to the iPad. There is a feature called iWork for spreadsheets and business apps withth Pages, Keynote and Numbers for
documents, presentations and
spreadsheets with charts, functions and formulas. The three apps will
be available separately through the App Store for $9.99 each.

iPads come unlocked with GSM and SIM. Deals with  world carriers will be announced later. The SDK is available today for developers.

The Keyboard Dock is a dock for
charging your iPad, integrated with a full-size keyboard. The dock has
a rear 30-pin connector, which lets you connect to an electrical outlet
using a USB Power Adapter, sync to your computer, and use accessories
like the Camera Connection Kit. And an audio jack lets you connect to a
stereo or powered speakers.