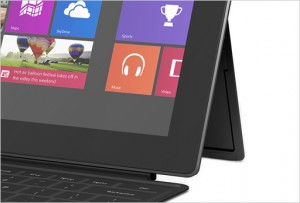 We don't have the space to compare all the specs and reviews here of the new iPad (4th gen) and iPad min. However the Surface RT tablet wins in the best freebie offered with an enterprise tablet and is thinner than the fourth generation iPad.

Microsoft stores will also offer other Xbox prizes. Friday will be a busy day because presales start for the iPad mini.  One of the cons of the new iPad mini and iPad (4)  is that they are  not designed for enterprise use. The sold-out Surface RT tablet is 9.3 mm thin vs the iPad mini at 7.2 mm and the new iPad retina at 9.4 mm. It is not thinner than the iPad 2 which is 8.8 mm thin.

The free music is limited time offer; only valid with purchase on 10/26 at Microsoft store, while supplies last. Microsoft online store excluded.

Xbox Music Pass is streaming only and also requires an Xbox LIVE Gold membership (both sold separately). Some Xbox Music content may not be available via Xbox Music Pass, and may vary over time and by region.

Microsoft brought back Bill Gates to tout the new Windows 8 operating system, blending input methods.  The Surface tablet has all the features of PC.  Bill loves his Surface.  When you show people the hinge, it is beautiful and incredible, noted Gates.