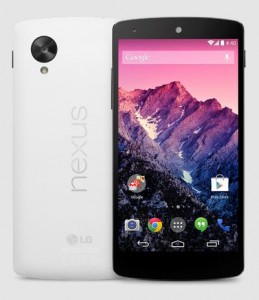 Google has announced and unveiled the Nexus 5 made by LG and is selling the unlocked 16GB model for $349.99 and the 32GB model for $399.99. As of this writing, the ship date for a 16GB Nexus 5  through the Google Play store went from November 8 to leaving the warehouse in 3-4 weeks.

Of course you can order one from Google Play and wait, however, Google announced that the Nexus 5 will be available at RadioShack, Best Buy and Amazon. We have not been able to locate the Nexus 5 in Best Buy or RadioShack stores yet. It may be worth a call or trip to your local store to find out if or when they will stock the Nexus 5. We searched Nexus 5

on Amazon and it was not available, yet. If you want it soon, it's worth checking back searching Nexus 5

Sprint announced that they will sell a tri-band Nexus 5 for $199.99 with contract.  T-Mobile will sell it in the coming weeks.

The Nexus 5 is faster and slimmer than the Nexus 4. The camera has optical image stabilization.

We will be investigation the best carrier deals to use with the unlocked Nexus 5.  It may be a month before you will be activate service.  In the meantime,  you can review all the new Android 4.4 KitKat features that will be available on the Nexus 5.

Currently, when you buy Kit Kit bars, for Halloween you could find a code to win a Nexus 7 or Google Play credits.  Happy Halloween.  Let's hope, there will no more tricks needed to get a Nexus 5, soon and you'll be treated to the best Android, yet.