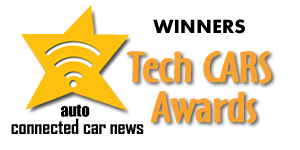 The Tech CARS (Technology of Connected Autos Rated Superior) Awards for connected cars and related products or services winners were announced AUTO Connected Car News . The awards have been dubbed the people's choice awards because winners were decided by online voting from December 12, 2014 - January 15, 2015.

"We saw great support from connected car communities in Los Angeles with the win of the Connected Car Expo at the LA Auto Show as well as excellent support from development communities for voting for Ford SYNC AppLink  and the open source OBDII device, Mojio," said Walford.

Many news publishers focus on only one car being the winner of technology awards, the Tech CARS Awards supports innovation from all aspects of the connected car space from free apps to aftermarket OBDII devices($100-$150) on up to $100,000+ electric cars.

"We found it very interesting that Apple is this case is not the biggest winner but the biggest loser for winning the Edsel Yugo Award for Biggest Snafu in Connected Car Technology," mused Walford.

What's next for AUTO Connected Car News'? Walford says that the push for autonomous self-driving cars is creating news on a daily basis, which is why the publisher offers daily and weekly news email news updates.